This website has been created to provide you with lots of useful information about the Costa del Sol and to allow you to explore and learn more about this beautiful region, giving you the opportunity to get the most out of your trip, whatever your reasons for visiting…

Where Is The Costa Del Sol 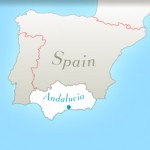 The History of Andalucia 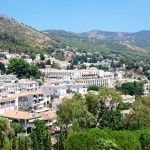 Mijas and the Mijas Costa 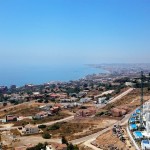 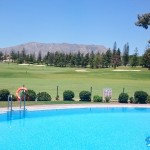 Golf on the Costa del Sol 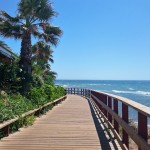 WHERE IS THE COSTA DEL SOL? 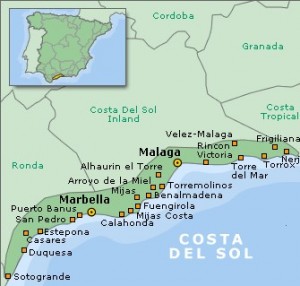 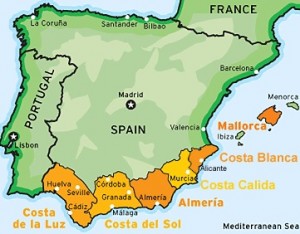 The Costa del Sol, literally meaning the Coast of Sun, or Sunny Coast, lies across the bottom right side of the Iberian peninsular and is the most southerly costa of mainland Spain.  With average temperatures reaching highs of around 31°C in summer and 17°C in winter (although these are frequently much higher), its position ensures a year-long pleasant climate and with around 325 sunshine days a year, its name is well deserved!

The Costa del Sol, along with the Costa Tropical (further east) and the Costa de la Luz (west) is only a small part of this southerly chunk of mainland Spain – it belongs to the beautiful region of Andalucía, which practically takes up the whole of southern Spain:- 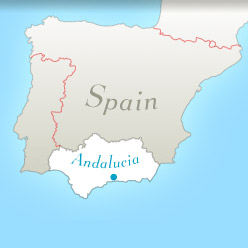 Andalucia is divided into eight provinces: Almería, Cádiz, Córdoba, Granada, Huelva, Jaén, Málaga and Seville which is its capital.  It is the only European region with both Mediterranean and Atlantic coastlines. The small British overseas territory of Gibraltar shares a three-quarter-mile land border with the province of Cádiz. 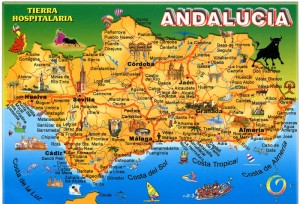 A Brief History of Andalucia

The region’s history and culture have been heavily influenced by the Muslims and Romans, as well as earlier Iberians, Greeks, Carthaginians/Phoenicians, Vandals, Visigoths and Byzantines, all of whom preceded the Muslims.  Castilian and other Christian North Iberian nationalities regained and repopulated the area towards the end of the Reqonquista (meaning “reconquest”), a period of approximately 781 years in the history of the Iberian Peninsula, starting with the Islamic conquest in 711 and ending with the fall of Granada (being the last Islamic state on the peninsula) in 1492.  After this came the discovery of the New World and the period of the Spanish and Portugese colonial empires followed.  Click here for a more detailed History of Andalucía.

The Costa del Sol takes up a large section of the southern coast of Andalucia, stretching from Nerja at the Eastern end, down to Sotogrande in the West. Further east, the region between Nerja and Adra makes up the smaller and lesser-known Costa Tropical, then from here up to San Juan de los Terreros is the Costa Almeria.

How Tourism came to the Costa del Sol

Having been a relatively prosperous commercial and industrial centre for most of the 19th century, Málaga province experienced a severe economic contraction in the 1880s and 1890s and tourism began to be looked at as a potential source of income, although years passed before any initiatives began to develop Malaga as a tourist resort.  In 1897 a pioneering group of businessmen recognised this potential and founded the Propagation Society for the Climate and Beautification of Malaga.  Their promotional campaigns emphasised Malaga’s mild climate and began to attract enough year-round tourists to help relieve the economic slump.

At the beginning of the 20th century, the Baños del Carmen beach was developed and opened in the east of Malaga and the Torremolinos golf course followed in 1928.  Unfortunately, development of the tourist sector was interrupted by the Spanish Civil War and then World War II.

After World War II, Marbella was a small village with only 900 inhabitants. Ricardo Soriano, Marquis of Ivanrey, popularised it among his rich and famous friends by moving there.  He had acquired a country estate in 1943 which was located between Marbella and San Pedro and later built a resort there called Venta y Albergues El Rodeo – this saw the beginning of tourism in Marbella.  Soriano’s nephew, Prince Alfonso of Hohenlohe-Langenburg, acquired another estate which in 1954 became the Marbella Club, an international resort attracting movie stars, business executives and nobility. Both these resorts were visited by members of European aristocratic families and transformed Marbella into a destination for the international jet-set.

In the 1950s Torremolinos also began to become a popular holiday destination, being frequented by international celebrities such as Grace Kelly, Ava Gardner, Marlon Brando, Orson Welles, Brigitte Bardot and Frank Sinatra.  The Hotel La Roca had opened in 1942, with the Hotel Pez Espada opening in 1959.

During the 1960s and early 70s the costa’s tourism boom resulted in both a demographic and economic expansion and the Costa del Sol brand was created to market Malaga’s coastline to foreign holiday makers, soon becoming a popular holiday destination not only for its beaches but also for its local culture.

Historically, the provincial population had lived in the fishing villages, the white towns (pueblos blancos) a short way inland from the coast and in the mountain regions but the economic boom led to a rapid increase in building on the outskirts of the costa’s main towns to accommodate the new workers arriving from the countryside.  Some towns managed to preserve their historic centres but most were altered by commercial and residential developments.

The popularity of Torremolinos as a tourist destination spread to the nearby towns of Benalmadena, Fuengirola and Mijas, all of which saw a growth in tourism in their own right and the appearance of small fishing villages radically changed with the opening of new hotels.  This increase of holiday accommodation, along with the rebuilding of Malaga Airport saw the 1970s bring mass tourism to the Costa del Sol and low cost charter flights and package holidays ensured a continued increase in popularity.  As development continued, so arrived the influx of expatriate retirees from northern Europe, most notably Great Britain, and to this day it is a leading destination for those wanting to make a home on the Sunny Coast.

Today the Costa del Sol is not only known for its beautiful scenery, exceptional year-round climate and rich cultural history, but also now for its unbelievable number of immaculately kept golf courses.  Not surprisingly it is often nicknamed the Costa del Golf, being one of Europe’s most popular and important golfing regions.  click here for information on the costa’s golf courses.

HOW TO GET TO THE COSTA DEL SOL

Now with three terminals, Malaga Airport is one of the biggest and busiest airports in Spain and the entire coast is easily reached from here, although there are also airports in Granada, Jerez, Seville and Gibraltar, if you are holidaying further afield than the Costa del Sol.

Malaga airport has a large car hire facility, directly underground – just follow the signs after Baggage Reclaim. There are also many off-airport car hire companies who will pick you up outside arrivals and take you to their office, often just a minute away.

Taxis can either be pre-ordered or flagged down directly outside Arrivals.

The train station is just across from Arrivals, a short walk away.  Trains run around every 20-30 minutes between 5am and midnight. The furthest stop is Fuengirola so if you’re travelling further down the coast than this then you’d need to either catch a taxi onwards from there or take a quick hop over the road to the Fuengirola bus station where buses run frequently to almost anywhere.

Train Lines between Malaga and Fuengirola or Álora 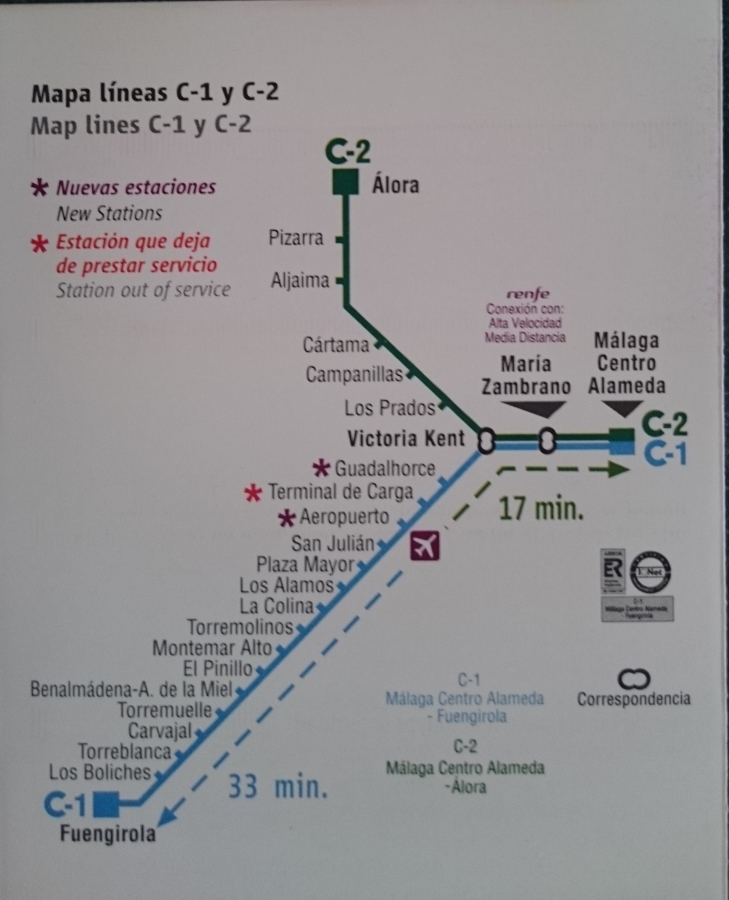 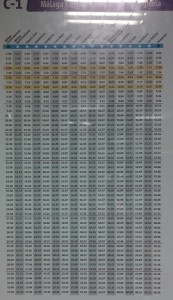 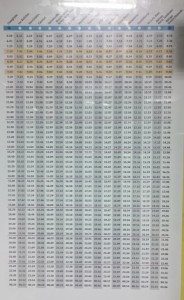